This is how you do it

We’ve all (well, many) have been there – “Hey, this is really good; how do you make it?”  You then get a reply akin to, “Oh, it’s a bit of this and a drop of that then cook it until it’s done.”  Yeah, I know; it’s not really conducive to replicating a dish when you don’t know exactly how much to put in.  I’ve been guilty of being on the other side, too.  There are things you get used to cooking over the years and, really, never bothered with measuring anything, just estimated.  It was all about proportions.  I’ve come across some pretty cool books on just that in the past few years, such as Ratio:  The Simple Codes behind the Everyday Craft of Cooking by Michael Ruhlman or Salt, Fat, Acid, Heat:  Mastering the Elements of Good Cooking by Samin Nosrat.  The Food Lab:  Better Home Cooking through Science by J. Kenji López-Alt is another that comes to mind.

From what I’ve read, they basically say the same thing – learning the ratios of types of ingredients to each other plays a big part in cooking successfully.  Sadly, I’m totally not there yet with learning the ratios, but I’m hoping to get there.

Meanwhile, I figured it was high-time to start noting the info for my own recipes.  My cooking is pretty simple as it really comes down to proportions.  Of course, this also means that sometimes I get the balance right and sometimes I miss the mark (to my chagrin).  Gabriel’s pretty supportive as he usually likes whatever I churn out.  However, I know the mark I’m trying to hit so I do know when my “proportion” method of cooking hasn’t worked.

So, this leads into my first attempt at recipe development.  It’s kinda fun but, also, a little frustrating if you’re not just testing out your recipe but also plan to serve your dish to others (so then you’re not making a small amount).  Such was the case with my deviled eggs the other day.

Let me start by saying that the resulting dish was…hmm…okay; it just wasn’t up to the standards I expect that tell me *I* think I did a good job.  Mind you – this is with a simple recipe.  I suppose the good news is that since the recipe is simple, it’s easier to tweak the amounts for the few ingredients and the timing in order to do a better job later.

When I see other people’s recipes they’ve developed, it’s always the final result.  I don’t stop to consider how much work they could’ve put in before they achieved what they wanted so, to me, everyone else is an expert at recipe development.  I’m thinking I’m a bit off on this.

Back to the deviled eggs.  Since Trader Joe’s egg size options are now either large or jumbo, I decided to go with the jumbo eggs.  Unfortunately, as my experience has been with hard-boiling extra-large eggs, I wasn’t entirely sure how long to cook the jumbo eggs.  I looked up the info online and what I found said to cook them for 12-14 minutes.  I opted to split the difference and cook them for 13 minutes (didn’t want to cook them for too long and end up with the unattractive green color around the yolks).

Well, I ended up in the opposite direction as I hadn’t cooked them long enough.  While the eggs were thoroughly cooked, the yolks were not dry enough to mash finely so they wouldn’t leave lumps.  I’ve never ended up with lumpy yolks before so I thought they were acceptable and would “unlump” during the mixing of the filling.  Nope.  They stayed lumpy.  Ah, well!

As I was in the process of making 36 deviled eggs (18 jumbo eggs), there was no turning back and starting over.  Besides, at this point, I did think they’d be fine despite it being a few years since I’d last made deviled eggs.  So, first note – 13 minutes is not long enough for jumbo eggs.  Try 14 minutes next time with jumbo eggs (with extra-large eggs, 12 minutes has always been the correct amount of time for hard-boiling that size).  I did use a fork to mash the egg yolks, but I didn’t actually think that was the problem.  I’m pretty sure the yolks weren’t dry enough.  However, a quick look online resulted in at least one person stating that it’s best to use a whisk to mash up the yolks and that a fork will not do a good job.  Either way, I messed them up.

Next step – add the mayonnaise.  18 jumbo eggs results in a lot of yolks.  I’ve run into the problem of adding too much mayo in the past so the filling was too creamy (I like it a little bit on the drier side so that the filling holds up better after being piped into the egg white shells).  The trick is to add a little at a time.  Of course, I still ended up adding too much mayonnaise.  Another point I learned is it’s best to add the mustard first.  The only thing is that the amount of mustard added is in proportion to the amount of mayo used – too little and it gets lost among the mayonnaise; too much and it’s a little too tangy (in my opinion).  To my chagrin, I ended up with both too much mayo and too much mustard!

Clearly, the filling is too dry at this proportion.  I added another ½ cup of mayo. 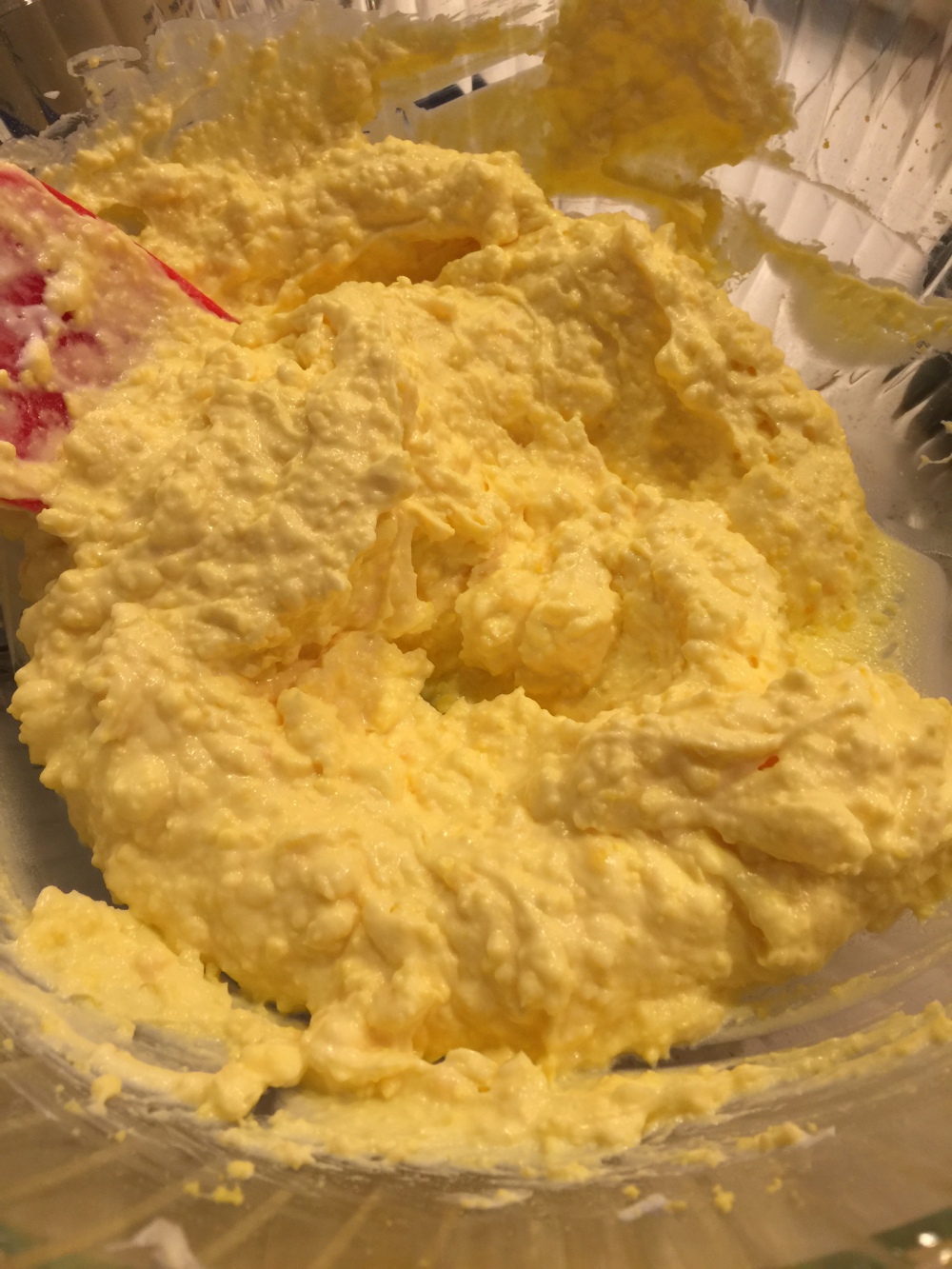 It still seemed too dry, but I knew from the past to add the mustard before adding more mayo so I did that.

All along the process, you should be tasting as you add ingredients, even if you’re following a recipe with specific amounts.  For cooking, recipes can often be jumping-off points (as I learned in culinary school) and if something doesn’t taste like the right amount, you need to be ready to make adjustments.

Going back to the addition of mustard (1 tablespoon), the proportion to 1 cup of mayo tasted right to me.  However, the filling was still too dry so I knew I needed to add more mayo.

Once, twice, three times was not the charm.

I knew I was close to how much mayo I needed to add so I added ¼ cup.  At this point, the consistency of the filling seemed what I wanted.  However, upon tasting it, I couldn’t taste the mustard.  I added another tablespoon of mustard.  That was a mistake.  Even though it was just one tablespoon, it upset the consistency of the filling (so it was too creamy) and added too much of a tang.  I probably should’ve done another ½ tablespoon or, even, 1 teaspoon.

Another problem I’ve run into is adding way too much salt due to not measuring.  Here, while I did state you’d want to be flexible, you really should measure the salt.  Too much salt, and there’s really no way of fixing it.  At least with too little salt, more salt could be added then taste the filling before adding more.

Same thing with adding the black pepper.  Add it, taste it, look at it.  If it tastes fine, don’t add more.  In this case, my holding back with the salt and pepper and increasing both slowly contributed greatly to not over-salting and over-peppering the filling.  Yay, at least I got that part right.

Well, here’s another fine mess I’ve gotten me into

After mixing the mashed yolks with the other ingredients, it is clear the yolks are still lumpy.

No amount of trying to press them out works so I have to forge on ahead and note this for next time (using a whisk after the fact did not help at all).  Next stop – filling the pastry bag.

Now, I love pastry bags.  They make the task so much easier.  I used to fill the eggs by using a spoon to drop the filling in, but that goes very slowly.  Put the filling into a pastry bag, and you can fill all the eggs very quickly in just a few minutes.  However, for this many eggs, a large pastry bag is needed.

Unfortunately, I couldn’t locate the size star tip I needed to pipe the filling with a pretty pattern so I took the vain-but-inefficient-and-messy route.  I used a 10-inch pastry bag (but, hey, I got to use a star tip!); I figured refilling the bag as I worked wouldn’t be such a big deal.

Well, I was wrong.  As I squeezed the way-too-small bag, the filling inside made its way up so when I refilled the bag, it was not quite so neat as after the first time.  I was determined, though, to use that star tip so I dealt with the icky mess of egg-yolk filling oozing out and getting all over my hand and the outside of the pastry bag.  So, for next time, use the right size pastry bag for the job.  In this case, the 18-inch pastry bag I didn’t use would’ve been ideal.  The 10-inch pastry bag was ridiculously small for this task (but I did kinda get the aesthetic I wanted, except that the filling was too soft).

It’s all about the egg yolks

I’ll post the recipe for this past time, but I could be tweaking it for the next time I make deviled eggs.  Anyway, what did I learn about proportions?  That I have a lot to learn.  That for 18 jumbo egg yolks, 1¼ cups of mayo is too much, as is 2 tablespoons of mustard.  It probably should be more like 1 1/8 cups of mayo and 1½ tablespoons of mustard.  Bottom line is the size and number of egg yolks are your constant while everything else is a variable.